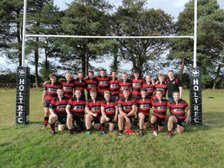 Wymondham 2’s traveled to Holt RFC for what was to be a hard-fought game against a well drilled Competitive side.

Wymondham’s pack dominated the forwards game, winning all but a few line-outs, attacking and defending with a solid scrum throughout.
The first try came after a textbook scrum into a 10m drive which ended with number 8 “Sandy” taking the ball over the line. Unfortunately, after a fantastic 20 minutes at full back, the returning Tim Barry took an injury to the knee and was substituted for Steve Martin, Tom Mee moved to full back.
The game continued, with neither team backing down in defence, Wymondham making it hard work securing the ball. However, solid defence prevailed and ended in a 20m driving maul before Ziggy, making quick work passing out to the backs leaving Elder to finish off making it 0 – 10.

Unfortunately, having spent the majority of the time in Holt’s half, a lack of discipline from Wymondham resulted in a well kicked penalty for Holt taking the score to 3 – 10.

After a solid performance, Matty Brighton took an injury to the Rib and James Coleman stepped into the row joining Patrick Conway. Wymondham looked to score again with a cross field kick from captain Tom Midgley, caught by Ben Edwards but unfortunately unable to finish.
After challenging second half defending the big Holt squad, Wymondham took injuries including Gregg Russell and Oli Coleman which was further complicated by a yellow card to James Coleman.

Playing the final 10 minutes with 14, Wymondham’s tackling came into its own, with a strong Holt side refusing to give up the gauntlet Wymondham refused Holt a score.

Both teams showed some fantastic elements throughout, keeping the spectators entertained. Plenty left to work on but having had an unsteady start to the season, Wymondham 2’s looks forward to their next game against Watton on the 19th October.