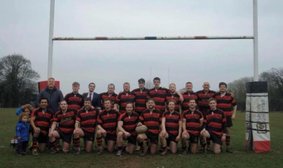 Tensions were high this Saturday afternoon with the 2nd XV playing Lowestoft &Yarmouth in their last competitive home match at Tuttle's Lane. Added to that pressure was, a win here would have them undefeated at home for the whole season and added to that, a loss here could ruin the chances of the 2nd XV winning promotion and the league!

The game kicked off and you could tell that the home side were eager for the win but some nerves were showing. After 15 minutes, the nerves seemed to be out of their systems and Wymondham started playing well.

Unfortunately, notes were not taken during the game and your write up writer had his head in a scrum/maul or ruck for most of it so I have tried to piece together as much as I can but there are gaps....

If anyone can shed light on how the other tries were scored, please contact me so I can better write this historical game up!

In all though, Every man on the pitch played their hearts out and gave Wymondham the result they were looking for. Next week is a week off for the 1st and 2nd XV but on the 7th, the 2nd XV will be playing Lakenham Hewit for a shot at the title. If they win, they will leave Tuttle's Lane as Champions!

Player of the match