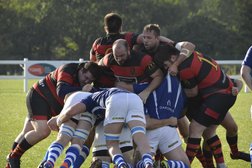 A feast of entertaining rugby

A feast of entertaining rugby set the season alight at Barnard's Fields yesterday. After exchanging early tries Wymondham took control of the game dominating the set piece, defending with disciplined structure and entertaining the large crowd with some disciplined free flowing rugby.  Diss fought hard to hold back the tide but Wymondham scored four tries and a flawless kicking display by Charlie Delaney took Wymondham into a  35 - 7 half time lead.

But momentum can change quickly in rugby and those who thought the game was over were badly mistaken, Diss rallied the troops, raised their game and battled back in the second half gradually taking control and dominating possession and territory, a yellow card didn't help Wymondham's cause and when Diss scored their fourth try with 10 mins to go the game was on a knife edge and could have gone either way. A final effort by Wymondham took them deep into Diss territory to see out the final minutes and this resulted in a final try to put the game beyond doubt. Final score 40 - 29.

A bruising game played in excellent spirit resulting in great entertainment and a great advert for local rugby, congratulations to the players and all involved.