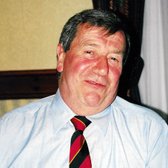 It is with great sadness that we record the death of Paul Anema...

"...was typical of Paul as he was always the first to put up his hand if something needed doing..."
John Mackay

It is with great sadness that we record the death of Paul Anema, who died last weekend. Paul had suffered ill-health for some time, but, thanks to his family, still managed to come along to Barnard Fields last season to see his beloved team consolidate their position in London 2NE.

Paul was Club Chairman between 2001-2004 and applied his no nonsense, pragmatic, style of leadership to good effect while in post ensuring that the club continued to thrive and prosper on his watch.

I first worked with Paul when I was elected Youth Chair and was required to attend Management Committee meetings which, at the time, were held in The Feathers, in Wymondham. I must confess to being initially a little in awe of Paul, but soon came to like and respect him for the energy and enthusiasm he brought to the task of achieving success for Wymondham.

I remember well, when my then 17-year-old son, Rob, tore his cruciate ligament playing for the 1XV at Tuttles Lane, it was Paul who virtually carried him to the changing room. In fact, that act was typical of Paul as he was always the first to put up his hand if something needed doing, and a number of us remember the many occasions we worked alongside him setting up Tuttles Lane for Fireworks Night, Charity Days or the Beer Festival.

Paul, of course, also provided a formidable pair of players for the club, and I don’t think it is an exaggeration to say that Adrian (‘Animal’) and Darren would have walked into most of our first teams over the past 20 years, and we extend our condolences to them, to Paul’s wife Janice and to the rest of the Anema family for their sad loss.

I hope we will be able to have a proper celebration of Paul’s life in the very near future, but, in the meantime, let us remember Paul as he was, a jovial, larger-than-life character who contributed in no small part to building the club that we have today.